RAISING THORN : Why I'm Glad my 1st Feature was My 3rd Feature.

4 years ago today I handed over the first draft of a script to my producer and partner Anna, I had been working on it since I was about 15 and on 29th of February 2012 I finally finished it. The date was important, I had set it as a deadline almost four years earlier, because the films story took place on February 29th, it seemed fitting.

In all honesty I always thought Legacy of Thorn (Known as Thorn then) would be my first low budget feature, but as fate would have it, it was my third. Looking back now at all the delays and mishaps that led to the film taking almost 10 years to get off the ground it all seems like a blessing in disguise. The film happening when it did was great for a lot of reasons, the main one being, that, until that point, I hadn't really been ready to make it. 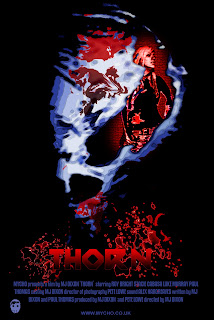 I had come up with the story when I was pretty young, initially starting life as a Halloween fan film idea of sorts, I quickly went a different direction, taking the elements from my idea that were factual and therefore I could use them with out a law suit (mainly the nordic rune elements that inspired Halloweens later sequels) and then starting with everything else from scratch. Overall it was a pretty simple concept, Kind of Halloween meets The Terminator (Two films which I always felt went hand in hand in terms of tone) but told between two time zones that ran against each other.

The problem I always had with the traditional 'Slasher' set up, was that they always have a strong opening and then 40 minutes of downtime before they got to the 'good stuff'. The solution I eventually came to was to think of it as two films. One set on February 29th 2008 and one on February 29th 2012, the first playing backwards and the second forward. This way, not only could I break up the downtime, but I could essentially conceal important elements in the story that would feel otherwise mundane. Of course, 15 year old me would have been able to understand any of that.

So as I tried to get the project off the ground, It never seemed to work quite how I imagined it, over the years I would try and make it work, but at the time didn't have the correct understanding of screenwriting and story structure to do so and so I focused my attention on other things. I was disheartened, because I'd always imagined it would be my first 'proper' feature. Another disguised Blessing.

Eventually, over 10 years later, after making a butt load of horrible short films and some ok ones, I felt a little more confident that I had the filmmaking tools to make it work. By this time I was in preproduction on my actual first feature 'Creepsville' that I had started to develop with another writer after we graduated. Of course, I still wasn't sure I was ready and so I decided to makes another short film to help us get our heads round using the gear we'd be shooting on.

I dusted off the old script for short film version of Thorn I'd written (Essentially a scene taken from the bigger movie), another writer friend of mine asked if he could polish it up, and then we shot it in an evening in my friends garage, we put it out there and people dug it, it even won first prize in the Scary or Die competition in 2009 against some pretty amazing entries. It was at that point that I started to feel like 'Thorn' should have been my first feature, and again I felt disheartened. Once again, it was a blessing in disguise.

Creepsville came and went, It was a tough shoot and that was for a relatively simple concept. We got to the end, but the shoot had been a huge mess, After graduating University a year before, that was still a shoot that I've always considered my 'True Film School'. The film suffered in a lot of ways from my lack of experience. I thought to myself, this could have been 'Thorn', I could have fucked that up, and I felt less disheartened. 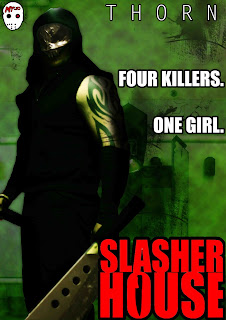 In 2009 Post on Creepsville was underway and taking a long time (I was fairly hand offs with it) and rather than sit around waiting I started working on the idea for my next film. "This time" I thought "It's sure to be Thorn".

Then out of the blue I got wind of two films that were in production that sounded scarily similar to my 2005 feature script 'Slasher House'. I panicked, SH was one of the best ideas I'd ever had (make of that what you will) and it was a pretty low budget screenplay. One location, small cast. I realised it was now or never and I polished up the script and moved the film into preproduction in a bid to 'Get there first'. (Ironically the two film never even went under the lens).

Thorn ended up on the back burner, but this time it felt a little better. See I had planned for Slasher House to be an ensemble movie and the 4th in a series. Thorn being 1 of 3 leading up to it, The other 2 being Hollower and Cleaver : Killer Clown. This would mean that I would have to change my whole series structure, but the upside was, Thorn played a big part in the Slasher House script. I decided that Slasher House would serve better as an introduction to these characters and we could tell their stories later on. Which we did.


Slasher House was shot in 2010/2011 and locked picture in 2012, the day after the Premier I receive dozens of calls and messages asking of there was was going to be a Thorn movie. By the time it came out on DVD in my homeland (The UK) Thorn was already an audience favourite. Now I felt like if there was a time for the Thorn movie, it was now, but whilst making the film, I'd had an inkling this would be the case.

Like I said at the beginning, a few months earlier on February 29th I had handed the first draft of a script to Anna and during this time I had been working on getting the final script ready. The script was HUGE and there was no way that I, as an inexperienced filmmaker, could have made it as a first feature, I mean the finale features a goddam Helicopter for crying out loud.

The true blessing was that the film allowed itself to be ready before it would allow me to make it and I'm glad it did. Legacy of Thorn is one my proudest filmmaking achievements and had I made it earlier I'm not sure I'd be able to say that.

In February 2013 we started preproduction of Legacy of Thorn and one year later it Premiered in London on February 28th. Of course there was a whole adventure along the way, but that is another story for another Leap Year.