Last week I talked about the advantages of getting your image how you want it 'in camera', this saves me a lot of post production work, especially when it comes to grading. A lot of projects I work on have to have a fast turn around and I know that a good deal of that will be grading the footage right at the end to give it its final look and bring out the colours and depth that the production needs.

As a general rule, I try to get my image as close to the final product and the truth is, these days, I do very little colour correction after the fact as well. There are a lot of reasons for this, but mainly because its the that I personally like to work. As usual, Its not the right way or the wrong way, just my way.

As chance would have it a friend of ours, Georgie Smibert (Who played Deputy Howells in our latest feature film 'Cleaver : Killer Clown' and our Short 'Slaypril Fools Day 5' ) needed to shoot an audition for a film role she was applying for. As recompense to our actors giving up their time to work on our stuff we're always happy to help with showreel and audition stuff  (A good habit for No budget filmmakers to get into) and she wanted to shoot the audition as a 'scene'. 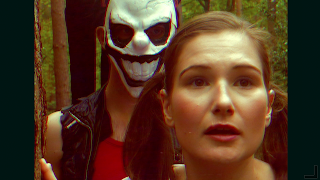 We made the choice to shoot the scene as if we would shoot it on a set, but just from her angle, as if it were just that take from the overall coverage, this was mainly so the other actors didn't distract from her performance.

Now Georgie was going to cut it herself on a basic windows editor (Movie Maker I think) and so therefore I knew she wouldn't have access to correction tools or anything like that. So we decided that we would get the footage that she needed ready to go straight from camera, but it also gave me a chance to take some reference pictures in terms of how I approach colour grading.

I do my colour grading and correction 'in camera', before I even start shooting, I hate to rely on post for 'anything' and as such I approach shooting in a very practical way, so that, for the most part, I'm just making cuts and not spending weeks on trying to get colours, tones, grades right. I think about it at the time (or usually months before hand) and then make sure I get the desired image there and then.


The camera I use currently is the Panasonic G7, which give me unbelievable control over everything from Curves, to Contrast to Saturation to Colour Temperature and beyond. All things that I would tweak in post otherwise I can now just do in the camera itself. I used to a lot of this on the Canon 600d too, although that gave me a little less control overall, its still had an unbelievable amount of control via its picture profiles and my last 3 features were shot on it, I had to do very little in way of correction or grading in post even on Canon's Rebel series. I'm fairly new to the G7, but so far it makes controlling my image input a breeze.

To me the change is very noticeable and a much nicer image. I added a 'hair light' at the rear just to bring out Georgie a little more. But that was a cool LED with no gels or filters or anything, all the colour came and depth came from just working with the cameras Profile settings to get the desired level of Contrast and Saturation and of course Colour temperature and White Balance. I also enhanced the sharpness a little too, but thats really just lends a hand with focus and as we weren't doing any post at all this would really be my only chance to fix that.

The biggest thing I've found is the use of white balance and how it drastically effects the tone of the image, I was always advised to balance to white of existing light in the room, but really experimenting with the colour balance opens up a world of style right in your camera. I may do a colour chart to demonstrate how balancing to different colours effects the image, if you want something like this, let me know in the comments below, I tried finding one online, but so far, no luck.

Anyway back to Georgie's Audition, the scene in question was quite light and fairly comedic, So I went for a brighter, lighter colour to keep the tone light, pushing the cameras colour temperature toward a warmer Orange tone. If I were doing a Horror or a Sci-Fi or a Thriller I would make a drastically different choice in terms of what colours I would balance to. This is how I apply a grade 'in camera'.

Now, obviously this approach gives you less control in Post, but for me that is the intention. It forces me think about the decisions I make and, of course, it forces me to be a little more prepared. Now balancing to different colours can give your image a completely different feel. I'll make these choices fairly early on in larger productions and do tests with lights/gels etc to get the look that I'm after.

Adam Dillon (Nathan from Slasher House) dropped in on his way to the Premiere of our other new feature Hollower last weekend and I stole a moment from him to demonstrate the approach and the drastic difference it can make. I had my camera set for a a few different looks I'd been working on. 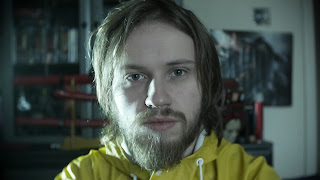 So this what the original 'Normal' image looks like. Set for the the rooms natural White Balance. A fairly standard shot. To grade it i would probably pull the curves out to make the shot a little more 'Flat', like in the first example (The G7 isn't really the best for shooting flat images, so you work with what you've got) but this is pretty close to how I would shoot, if I were preparing to do colour work in post. As you can see its a fairly bland image in terms of colour. Below I've worked on some quick picture profiles, just to show how much of difference shifting colour can change the tone and style of an image.

Obviously its a fairly quick example. On set I'd take much more time in lighting my subject and  surroundings first, but for the sake of a quick reference of what I'm talking about, this should demonstrate it fine.

All of these images are raw JPEG frames from the camera (The Panasonic G7 allows you to save stills straight from the footage in camera), uploaded straight from the card. As you can see each Grade changes the mood of the image dramatically, each one of these grades was created 'in camera' by adjusting the cameras visual settings. I used a cool LED to give me a little back light, but that was it. My camera only stores 4 looks, but really the looks you can create using just your camera are almost infinite. This is before I've even started to bring other colours into the mix using gels/filters etc.

I understand some people just won't understand my approach, its extremely counter intuitive to the way most people have become used to working, you just have to look at a modern standard film workflow and how big a part 'grading' and 'colour correction' play in that to know why this approach won't suit everyone. It 'sometimes' doesn't suit what I'm doing either, as I talked about last week. If I can though, this is my preferred way to work, to me I see it like painting on set and its a lot of fun.

This is just one of the many ways I work, and it suites me, it might not suit you, but for me filmmaking has always been about thinking outside the box and trying things that are new to me.