WRITING ABOUT NOT WRITING

I get writers block. I get it a lot. Which is fucking annoying as shit when you have at least 5 scripts that you have to work on, 2 of which in the next few months. But of course right on cue writers block lands like a ton of bricks right when I don't need it.

Recently as I have several times in the past, I find myself just staring at a blank page for a couple of hours until finally I give in and just promise to do double tomorrow. But of course the very next day, we're back to same situation. Being a filmmaker can be tough when this becomes a fundamental problem. Because it's hard to convey an idea or begin production without a script. At least for me.

So one of the biggest points of this blog in General is help me get my writing flow back, and because I've got writers block it's hard to think about anything else but writers block and so I figured that the only thing I could is write a post about writers block. Very meta, I know.

So it's something I've struggled with for most of my life, writing has never come naturally to me, mainly because of my severe dyslexia, which you may or may not have noticed depending on how early you catch my blog posts before I notice how little sense they make In draft one. Story, characters and ideas I have no problem with. Getting that out and down onto a page, now that's a task.

Quite honestly the fact that I've written over half a dozen features and triple that for shorts and you're looking at quite simply, a miracle. However, every time this condition hits me, I find myself being unable to overcome it easily.

I'm told that the best way to overcome the thing is to simply write and so here it is, me writing about writers block so I can continue writing what I'm supposed to be writing.

Its hard to believe that just 9 years ago Mycho was born. Looking back now its seems like no time has passed at all and yet also somehow feels as if 100's of years have gone by. To be honest I never thought it would last as long as it has. It feels awesome to look back and see what we've achieved and how we've grown and it also means were also 1 year off our 10th Birthday Celebrations.  Which is going to be something very special. 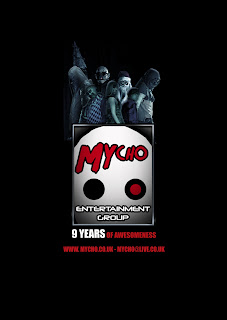 So I thought I'd take the chance to just say Thank you. If you read the Blog or visit the site, or watch our Videos, or buy our movies, or listen to our music. All of it means the world to us and its the ONLY reason why we carry on doing it.

This year saw a big milestone for us as we finally scored international distribution for SLASHER HOUSE. After an epic 7 year journey the film finally saw the light of day and that has been a big step for us. Which led us to the production of our next feature length film Legacy Of Thorn.

So once again thank you to everyone who supports us. We couldn't and wouldn't do it without you.

We have so much stuff coming up its unreal, but more on that later. Hopefully updates from here on in should be more frequent and in the meantime take a look around the new blog which is migrating into the website as we speak so its kind of like the Death Star II from Jedi at the mo.
MJ