You can find out more about the and download their music FREE HERE.
Posted by Mycho at 10:02 No comments:

SUPPLY AND DEMAND - How Veronica Mars Has Changed The World 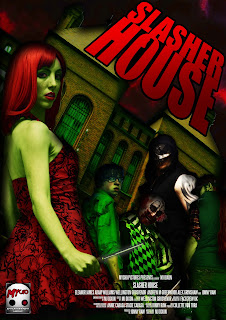 Ok so the last few weeks I've talked about things like Story and Cameras, but I suppose one of the first steps in heading out to make your movie is how you're going to fund it.

I am a believer in you not needing money to make movies and thats very true, You don't need money to make certain specific movies, that you have created to be made on nothing. Hell, I did that for my first feature CREEPSVILLE along with 25 + short films on shit all, before we finally set out and made our first 'budgeted' feature SLASHER HOUSE. But depending on the movie depends on the money. We still try to do everything on the minimum possible.

So with the world of Crowdfunding out there and us in the midst of trying to fund our brand new feature THORN using it, I have obviously spent the last few months really thinking about Crowdfunding and how it effects us as artists and filmmakers and I released something very interesting.

See when you set out to make, oh i dunno, lets say
' a movie about a taxi driver who kidnaps a girl, dumps her boyfriend in a park on an estate that is terrorised by masked maniacs who escaped from an asylum fire over a decade ago and have been living in a tunnel preying on anyone who wanders into their turf in the dead of night'
and then you realise to pull that off is a relatively impossible job, then you realise that as you near 3 1/2 years of production and still have no finished product, that people may not actually be interested your product, because you didn't check for the demand of said production, well now that can be avoided… kind of. 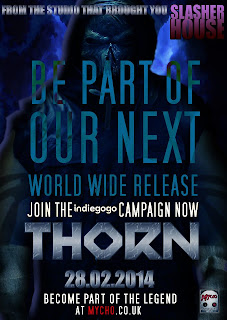 After Slasher House, we got some amazing feedback, but two characters stood out as firm favourites. THORN and CLEAVER (Fuck, the clown even made it to the cover). Since the film was shown I'd been getting calls and e-mails asking me what we were doing next and would it be THORN? Well, in fact it was… it always had been (Actually a little know fact is that THORN was supposed to be shot before Slasher House, but certain shifts in other film trends forced me into getting Slasher House out first, and funnily enough was a fantastic testing ground for several of the characters who were being developed for their own solo projects) and that is the film that we are now in Pre Production on.

See it seemed there was a demand for THORN from the offset, instead of setting out to make a movie that I wasn't even sure anyone would want to see (although I do make my best educated guess at the time), we now get to move forward on a movie that people may actually want to see from the start, before its even in the can, before we've even started to fill the can. Of course this is all 'educated' theory at the minute, of course. The IndieGoGo Campaign has only just started so it hard to judge that money and mouth will swap places as of yet.

My point here really comes down to someone called Veronica Mars, I don't really know too much about the property, other than it's some kind of US TV Show starring that chick from Forgetting Sarah Marshall (Which is amazingly funny for a Rom Com). which was cancelled by its network. But what I do know is that the Creative team behind it launched a Crowdfunding Campaign last week to make a 'Veronica Mars' Movie and they blew their target wide open in less than 24 hours. This, my friends, is the future.

This is absolutely supply and demand in full working order, this is people saying, if you REALLY want to see this, support this, If you REALLY want to watch this, then you can and you can pre order in order to make it happen, then they will Supply to that Demand. This approach could change the way that things are made, think about things like Firefly, Angel, and all the movies that struggle to get made that are based on amazing properties, but get caught up in studio funding bullishit yet have a huge and supportive fan-base. They now have a chance of happening and the same goes for the indie who lets say
'Made a movie called SLASHER HOUSE and now needs a small amount of cash to make their next movie THORN'.