LOW BUDGET LENSES : THE ONLY 2 LENSES YOU REALLY NEED

A couple of weeks ago I wrote a blog about a set of low budget Primes for under £50($70), of course they were only suited to mirror-less cameras (You can find it HERE), which came as a bit of a disappointment to those low budget filmmakers still shooting on DSLR's, which are great option for those who can't splash out on something more expensive, but lack some of the cheaper lens options available for MFT (Micro Four Thirds) cameras. A lot of people asked me about options for their Canon EF mount cameras and what options were available to them.

Since 2010 I have shot on Canon entry level DSLR's, I only recently moved over to using Panasonic in fact.  Over 6 years I shot 4 features between a 550d(T2i) and a 600d(T3i) as well as over 35 music videos and promos that aired on TV in the UK and US, so I know just how much a viable tool these cheap cameras can be. But when it came to budget lenses, there are very few cheaper options available. However that doesn't mean that there are none.

In the 6 years I've been using the cameras I have had a grand total of '3' lenses and the truth is that I only ever really used 2 of them and the good news is, the two I use are the cheapest lenses available. I shoot narrative films and music videos mainly and so the lenses I use are suited to that and, of course, depending on what you're shooting will determine the lenses that you shoot on, but up until November 2015 I shot using just these two pieces of cheap glass. 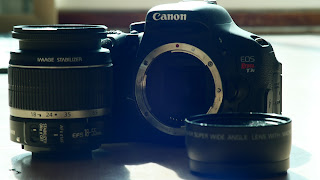 If you're buying your first Canon DSLR, you most certainly will pick it up with what is known as a 'Kit lens' (a lens that comes packaged with the camera). The Canon standard kit lens is pretty well known for being a decent 'all purpose' piece of glass that covers most bases for the average no budget filmmaker.

It has a decent focal range of 18mm - 55mm that means you can get both wide angles and those tighter shots with nice depth of field. Where this lens really falls down is in low light. It works great if your shooting in bright, sunlight spaces and at it widest it opens up to f/3.5 which is decent enough for most low(ish) light scenarios. But anything closer in anything other than great light is going to mean that you need something a little bit faster to get a good clean image. The lens however is great for things like crane shots, steady cam rigs and dolly moves.


One thing I did was pick up a wide angle adapter lens, just to open it up a little more for steady-cam shots etc. It cost me around £15 on ebay and its saved my ass more than a few times when the location just hasn't been open enough and saved me dropping a small fortune on wider lenses. The adapter also screws in half to become a macro lens fort shooting extreme close ups, which came in extremely handy in getting those close up eye shots that I love so much. 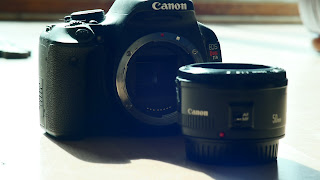 The cheapest Canon lens outside of picking up the kit lens is the Canon 50mm f.1.8. Its known in the photography and filmmaking community ads the 'Nifty Fifty' and it is definitely the most bang for your buck when it comes to lenses. I picked this up for a steal of £90 back in 2010, for Slasher House, but since then they can be found on ebay for as little as £50 (not to mention cheaper clones etc).

Being a faster lens, and a prime, the image quality that comes out this lens is amazing and it really goes that shallow depth of field that a lot of filmmakers look for in their image. Along with that, you can shoot in some very dimly lit spaces and still get an amazingly usable image.  Mix that with the fact its the cheapest lens available in Canon's range and you're onto a winner. If I shoot outdoors in available light at night (I do fairly often) then this is my go to lens for sure.


This is my work horse lens, meaning that for 5 years, I used it as much as I could and found unless it was a wide angle shot, or I was in an extremely small space, this lens did everything I needed of it and it performs amazingly in low light. I used this lens mainly for mids and close ups and its gives some stunning results. It is easily my favourite Canon lens and well worth the small price. If you're shooting on Canon SLRs this the lens to you want to have in your collection.

I considered adding a telephoto lens to the article, but in the end I decided not to. I was given a Canon 70 - 300mm f/4 a few years ago (someone had a spare) and over the course of 4 features I have used the lens 4 times and in all honesty I probably didn't need to (although it was helpful to have it), but really, in modern narrative filmmaking, unless you're shooting westerns, sports or car chases, you aren't gonna crack out that telephoto lens all too often.

In reality its probably better just to drop £10 or so on a Telephoto adapter lens if your using it for a shot every now and then, that way your saving your self a few hundred bucks for something that you'll use infrequently unless your shooting sports stuff.

There are certainly much better and more expensive lenses out there, but if you're looking for something that gives you bang for your buck without changing up your gear or switching to another camera then these are brilliant options and I know literally dozens of filmmakers who have got by for years using this exact same set up and we've shot dozens of commercially released work on these lenses.

Just remember that what you shoot on is not a substitute for talent or skill and no lens is going to make you a better cinematographer or filmmaker the same way that no lens will make you a worse one.