UPGRADE YOUR iPHONE CAMERA FOR £15

It's probably not ground breaking information anymore for someone to suggest that you can shoot movies on your iPhone. These days people are doing it all the time and there are some fantastic results out there (Hooked Up and To Jennifer are a couple of great horror examples) that prove that anyone has the power of filmmaking in their pocket and with the newest models shooting 4K, it seems more and more like a legitimate filmmaking tool.

YOU CAN APPLY THIS TO ALMOST ANY SMARTPHONE THAT RUNS ANDROID OR IOS.

I've been shooting stuff here and there on my iPhone now for a few years, I don't do it all the time as it not usually the tool that best suits what I'm doing, but I made a micro short for some film students a couple of years back on an iPhone 4 just to show that can be done. Of course, like I said, these days that is common knowledge.

My biggest problem with shooting on an iPhone is that its fairly basic when its comes to actually filming with it. There are rigs out there that are fairly inexpensive like 'The Beast Grip' (£150-£300) that allow you to do things like use pro lenses on the camera, but at that point I start to think that maybe you should just go back to your normal camera and just spend that money on a Canon Rebel or GH1. Also I'm not sure about dropping an extra £300 on my already £600 phone. So as usual I started looking for a more low budget solution.

The biggest upside of shooting on an iPhone, as far as I'm concerned, is that its so portable, Mainly because it fits in your pocket. Adding rigs and lenses and such starts to take away from its best function in my eyes, the fact that its almost invisible, this also make its great for guerrilla filmmaking without drawing attention. So I was looking for a way to just make the phone function as a camera without turning into something the size of DLSR.

What I've put together here is a list of add ons that I picked up to helps give me a little more flexibility with phones camera and the whole set should cost you less than £15/$20.


This is the foundation of turning your automatic phone camera into a useable camera for shooting. It was available for £2.50($3.99),  but checking whilst I updated this, I found they had raised the price a tad to a whopping £8!. Its fair enough, its a great app that allows control over White Balance, Exposure and Focus and the ability to lock them once you have your image the way you want it.

Depending on your phone you can shoot up to 4K resolution at 100mbps and its give you greater control over other input like audio and data rates as well as giving guides for various ratio sizes and will even export in your chosen ratio should you wish. Pro seems to work on anything for iPhone 4s and upward and for a HUGE 79p there is FilmicClassic that gives you the same functionally (without the higher resolutions) on older models.

The app is also available for Android devices too. I got it for Free a couple of years ago during a promotion so its worth watching out when they do something like that again, but if you dont want to wait, £8 isn't much to drop for such an impressive video app.

Check it out FILMICPRO Official Site for more info.

The PoundShop/DollarStore is a wonderful, magical place. One of the reasons is that they sell things like this. A tiny tripod with a phone mount at the top. Now on its own this thing offers up increased stability just using it as a mini camera handle. It just removes your hands from the actual camera to give you more stability in your shots.

The main reason to grab this, is for the actual phone grip at the top, this is because it has a 3 1/4 inch screw that fits to most tripods and rigs. This means that I can effectively use the phone camera on my nice tripod, My slider, my crane and even my steady cam if I wanted to. It just makes your Phone camera that much more adaptable if you're shooting on it. 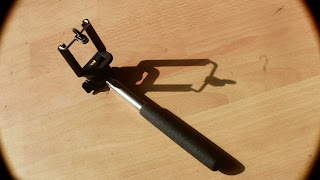 I hate these things, for their intended purpose anyway, I initially picked on up at the Poundshop/DollarStore to use as a quick boom pole for a shoot just to get my on board mic a little closer to the subject. It, again, came with a camera grip and I soon found that I could get some interesting shots using it with the phone, due to how light weight it was.

Since then I've been messing with it and, using two of them, have managed to make a basic shoulder rig and even mimic crane shots. Like I said, its also worth having to get your external mic in closer too, but in all honesty its a fantastically adaptable little tool. 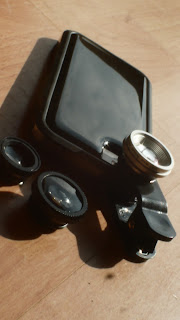 The camera(with FlimicPro) is pretty awesome in terms of functionality. Its not going to give you quite the depth that you get with a more expensive camera and really operates more with the functionality of a Camcorder. One of the biggest sticking points that I came up against was the fact that the camera had limited lens options apart from being able to zoom slightly, or move closer or further away.

For £5 on ebay, I picked up a selection of clip on lenses that simple clip and adapter over your camera  and then allow you ad a variety of different correctional lens over the pre existing camera. With this kit I got, There clip on adapter, A 2x Zoom lens, A Fisheye lens, A Wide Angle Lens and A Macro Lens for extreme close ups. They are a great little collection, especially for the fact that they cost a couple of pounds and they make the functionality of the lens just that little bit better.

The lenses are great and although, if I have my protective case on I get a little vignetting on the wider lenses, zooming in slightly fixes the problem and they really give me a lot more options when shooting. They also fit in a tiny little bag that comes with them and can fit in your pocket.

Here are some pictures of a Ninja to give you an idea of the difference they make.

This lot aren't going to turn your camera into a rival for Arri Alexa or even a low end DLSR, but they will give you more functionality and more options when it comes to shooting. The saying goes that 'The best camera is the one you have with you" and in this day and age your smartphone camera is the camera you are most likely to have on you at any given time.

The camera is till fairly basic and so getting decent professional looking image can be tough going, but the upside is that using your phone forces you to think about things like composition and lighting more, which can only be a good thing. There are some pretty cool apps out there that add different kinds of style to the camera too. We're having a lot of fun at the minute using the VHS app from Rarevision (£2.99) and the Lens+ App (Free) which allow you to recreate old film stocks and video styles which make for some cool and creative shooting.

Remember, i'm not saying that you should replace your camera with a smart phone, I'm just suggesting ways that you can make a camera that you carry with you everyday more functional, any camera can look bad in the wrong hands and any camera can look great in the hands of an expert, but its worth exploring what you can do to make your smartphone work for you as a filmmaker.