Liam Regan is a UK born filmmaker who has recently made waves in the indie community with his low budget debut feature Banjo based on his short film Confessions of Peltzer. Since premiering last year the film has played all over globe and solidified Mr Regan's status as a up and coming filmmaker to watch.

Inspired by filmmaking legends such as Lloyd Kaufman (Who makes an appearance in Banjo) and Frank Henenlotter, Liam Regan wears his love of genre movies on his sleeve with a style and approach that is reminiscent of the golden age of splatter cinema.

Micro Budget Massacre recently caught up with Liam about his experience making Banjo and what comes next.

Every journey starts with an origin story, How did you know you wanted to make films? 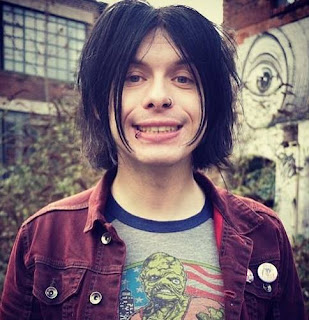 Ever since I can remember, I've always been enamoured with horror movies, some of my favourite childhood memories was when my Mum took me to my local video rental store and I would instantly be overcome with goosebumps and have a outer body experience (became dizzy) whilst browsing through the video boxes with gnarly artwork. A few of the memorable films I rented were the likes of 'Cat's Eye', 'Critters 2: The Main Course' and 'Ghoulies Go to College'. I quickly became a fan of creature feature flicks and with the addition of Sky Television in our household (in the early 90's) my love for the genre grew further as channels such as Sky Movies Plus and 'Bravo' showcased such milestone films in my life like 'Child's Play 2', 'Puppet Master 3: Toulon's Revenge' and 'Basket Case 2'.
However it wasn't until the Summer of 1996, when one of my weekly trips to Blockbuster Video resulted in a purchase (My Mum purchasing that is, I was only 11 years old at the time) an ex-rental video tape of 'The Toxic Avenger Part 2', a movie that showcase a dark mixture of horror and comedy, fused with exploitation and ultra violence, I had never seen anything quite like it before, and then when opening my Sky TV guide magazine back in September of 1996, I noticed that the channel Bravo was having a Troma season in October, and this eventually introduced and exposed me to their back-catalog of films. Titles such as 'Surf Nazis Must Die' and 'Rabid Grannies' made me excited for every Saturday evening to roll around, with my eyes firmly glued to the TV at 10pm in excitement. So thank you to Troma Entertainment, they corrupted my fragile little mind, to want to be a filmmaker with self masochistic tendencies. 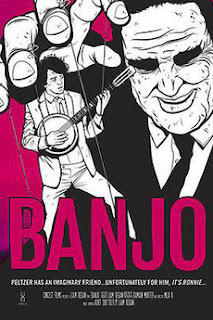 With more and more people choosing to just go out and shoot their own movies now, what made you take the DIY approach to making your first film?
I realised that nobody was going to give me money to make the kind of movie, that deep down in my heart, I wanted to make. Plus, I'm a nobody (still am) - Prior to Banjo, I had no track record, other than a shitty 13 minute short film titled 'Confessions of Peltzer' and numerous IMDb credits as a production assistant on independent genre movies I've worked on over the years, and why should they give me money? This is a business at the end of the day, and investors at least want to see a return, and I'm wanting to make a movie about a guy who snaps his penis (based on a true story) and summons his imaginary friend, which in turn, manipulates him to shoot up his office. Banjo isn't a possession movie, or a zombie movie by the numbers, so it's a gamble - and it was a gamble for yours truly also. Plus, I didn't want to compromise my vision, I wanted this to be purely my movie, with my name on it, I have always viewed filmmaking as immortality in a way, leaving art behind for generations upon generations to discover (now I have panic attacks about all physical media being destroyed and digital rights being lost in the apocalyptic wasteland, long after I die. Paranoia is a bitch!),
As we all now DIY filmmaking can be tough, what were some of the downside of going out on your own?
It's a very long, lonely and self masochistic process. You write the movie on your own, then you have like a hundred people help you during the actual film shoot, and then you're on your own yet again. It can be depressing, self deprecating, yet it's the best kind of film school I have ever experienced. You make a million mistakes, and ruin and tarnish relationships and friendships, but through the blood, sweat, semen and tears, you create your film-baby.
On the flip side, what were the upsides?
Creative freedom and expression, I had producers, actors, you name it drop out during pre-production, due to the extremities and content of the initial drafts of the screenplay. However I felt like I managed to strike the right balance, and I was able to hire the people I wanted to work with and move forward with the project, and held the vision I always had for 'Banjo'. I remember the first draft of the screenplay having at least 12 rape scenes, I remember being heavily influenced by hardcore exploitation horror movies during that period. I cut that down to 1 rape scene, which people never mention in reviews or interviews. 'Banjo' is essentially a rape-revenge movie, but has never been branded by that genre, which has puzzled me. 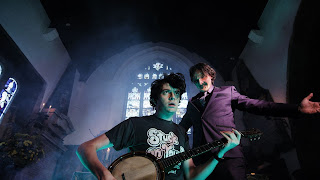 So after that hard work, your filmmaking journey is far from over, what happens when the film is done?
The film is finished and everyone thinks you're rich and a millionaire, when in reality, you're broke as you have ever been in your life, and are clutching at favours, and you'll meet a dozen people wanting to take advantage of your current desperate situation. People you would class as friends will inevitably end up on your shit list by the time the year is through. You'll make another million mistakes on trying to find a sales agent/distributor for your project, and then you'll waste a shit load of money on film festivals that don't even consider your movie, even though you have paid them an extortionate fee to at least watch the movie. I think the best way I could put it is: "Life is not a movie. Good guys lose, everybody lies, and love... does not conquer all."

Every film is an experience and more importantly a lesson, what did you learn that you'll take with you to your next movie?
Don't write too much dialogue, create more action sequences and make a much more fucked up movie. Lloyd Kaufman (President of Troma Entertainment) is my favourite shit disturber, he dealt with "taboos" and subject matters that the Hollywood system were too afraid to conquer back in the 70's and 80's, and I'm wanting to carry on that tradition. The key is to make a movie that nobody forgets, sure they can love it, or hate it, but they'll never forget it, that's the dream. I absolutely love making films, it's what I was put on the earth for, and I don't care if I need to max out more credits cards, or take out more loans or work as many legally available hours I can at my day-job, nothing will stop me from creating, it's the best therapy out there. I want to entertain people, I consider that as one of the major importance in life, other than finding the cure to cancer.
And finally, what is next?
I'm currently writing a rape revenge/black comedy titled 'Parents Evening' which if you put the following movies: 'Heathers', 'Jawbreaker', 'Detention', 'Class of 1984' and 'I Spit On Your Grave' in a blender, you would have the 'Parents Evening' protein shake ... full of bodily fluids. I hope to shoot that in 2018, and if anyone wants to give me money for 'Banjo 2: Make Room for Daddy' I would be more than happy to bring those characters back, but it all depends on the success of the home video/on demand release of 'Banjo' which is due out on Amazon and iTunes by late 2016.
For more information, feel free to add me on Facebook at http://www.facebook.com/refuseliam or follow me on Twitter @refuseliam
For more information on 'Banjo' please like the page at http://www.facebook.com/banjofilm or follow us on Twitter @banjomovie