Now before we get started let me just say, when it comes recording sound on set, there is absolutely NO SUBSTITUTE FOR A REALLY GREAT PROFESSIONAL SOUND GUY!!.
Someone who really knows what they are doing and can capture professional quality sound is indispensable and if you can afford a professional sound guy then thats exactly, without a doubt, what you should do.

However, if you're making a film on buttons and glue, the chances are you can't afford to hire a really great sound person and so the temptation is is to get your mate 'bob' to do it because he kind of, sort of knows his shit about music or something. This is a big mistake.

Filmmakers often overlook sound on their films and they really shouldn't, good sound is probably more important than a great picture, as you probably heard a billion times before, but its very true.

Getting good sound works very much the same as as getting a good image. It depends on having the right equipment and having the right person using it. As I discussed in my last blog, I've had people with 1000's of pounds worth of equipment show up on my set and deliver unusable sound and I've had a sound guy use a £30 mic and a cheap digital audio recorder and give me great sound, the difference is that one guy knew what he was doing and the other didn't.

After pretty disastrous sound on my first 3 feature films, I decided that I was going to teach myself how to record sound myself. I couldn't afford anyone else to do it and unlike actors/sfx artists/Cinematographers etc its very difficult for sound people to use films as 'exposure' outside of their reel (it shouldn't be this way, but the simple fact s no one notices good sound). The decision to do it myself was based on not having to underpay someone else, who would get very little out of it.

I already had a decent(ish) audio recorder (Zoom H2n) and on my last feature Legacy of Thorn we had borrowed a Rode VideoMic Pro, I really liked the results and so when looking for a mic that was the kind of thing I knew I was after, being that its a fairly common 'go to mic' for low budgeters. They retail at about £150 which is a decent price. I had a really great Jessops Video mic that cost me £30 15 years ago and it worked great, too great for the price, but it had seen better days and was beginning to fall to pieces and so moving over to a Rode seemed the best option.

I was about to drop the money on it when I found a video on youtube (this one) that compares the Takstar SGC-598 with the Rode VideoMic Pro and  I found that the difference was negligible at best. The huge difference in the two mics was that one cost (at the time) £160 and one cost £23. That didn't seem right, but the results in the video kind of spoke for themselves. 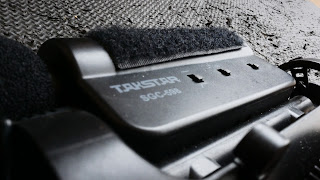 For £23 I figured 'whats the harm?' and picked one up. Amazingly the results we're exactly as they had been in the video, there was very little difference between the VideoMic Pro and the Takstar SGC-598, In fact once I got a handle on it, I found that I could get a better result out of it than I had ever got from the VideoMic Pro.

The mic also has a 10+ decibel boost which is handy for quieter moments, although I've found that it does add just a little bit too much hiss at times, however this can easily be reduced in post without too much damage to the audio. It also comes with a battery that, no kidding, I haven't changed in nearly 2 years and is still going strong. 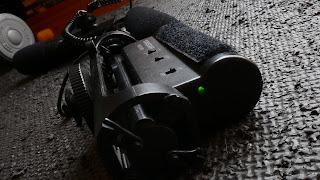 It also comes with a shock mount, which is one of its greatest assets. Most other cheap mics I've tried out, have dreadful handling noise that makes most audio unusable, but the shock mount on the Takstar is fantastic and reduces the noise amazingly well.

It best feature though is the fact that they currently cost around £20 each. I shoot a lot of action orientated stuff and as a result the amount of times mic get clips, hit or damaged as a result of me being in on the action is fairly frequent. If that was happening to £150 mics, I would be in deep trouble pretty quickly, but as these are so cheap, I pick up a couple at a time so that I always have a spare and so I can have extras on set should I need them.

I've been through 2 on my latest feature.
I would suggest getting it as close as possible for the best results, but I'd suggest that with any mic.

Don't get me wrong, this is not the best mic in the world, but for £23 its definitely the best value mic out there and it does give great results and I've struggled to find one as good for close to that price. I've use it on 3 of my own features in the last 2 years and dozens of other peoples projects and its never let me down.

Its damn good and its damn cheap. If you take the time to learn how to record good sound then a low cost mic won't hinder you at all. So if you're on a budget this is great and affordable option that is readily available and won't break the bank no matter how many mics you break.